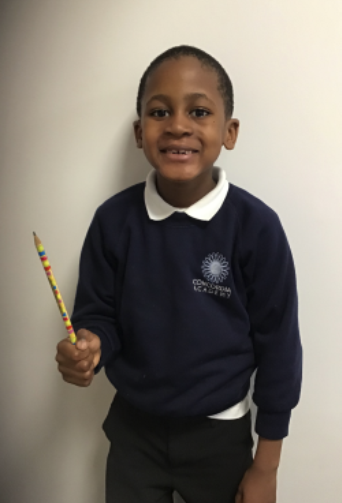 Antoine has received a Headteacher’s Award for his impressive attitude towards learning. When learning about subtraction, Antoine needed a little bit of support to understand regrouping (which can be very tricky!). Instead of giving up, Antoine asked for more and more questions to answer until he was able to tackle regrouping all by himself. Everyone was absolutely blown away by his determination!

Samuel received a Headteacher’s award for his super writing in Literacy. Samuel used a simile in his writing, and worked hard to spell his words correctly throughout. Great effort, Samuel!

Marcel received a Headteacher’s award for fabulous writing! He wrote about Y1’s trip to the Royal Mews yesterday, and wrote a whole page of detail about all of the exciting things that happened. Keep up the super writing Marcel!

Emma also produced some super writing today on the trip to the Royal Mews. Emma used some impressive vocabulary in her writing, including the words ‘striking’, ‘golden’, ‘carriage’ and ‘after that…’. Top effort, Emma!